Get the latest fashion trends, the best in travel and my life. 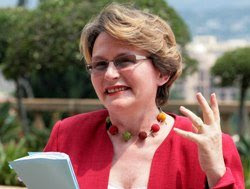 “Cape Town mayor Helen Zille was Tuesday named the world’s best mayor by a global urban issues think-tank, which praised her efforts to fight crime and to prepare for the 2010 football World Cup.

Trumping 819 mayors from around the world Zille, who also leads South Africa’s opposition Democratic Alliance, was followed by Zurich mayor Elmar Ledergerber in second place and Leopoldo Lopez of Chacao, Venezuela in third.

“Her strong leadership on fighting crime, the preparations for the 2010 World Cup and (fighting) drug abuse has made Cape Town a world class city again,” said a statement from the London-based City Mayors think-tank.”

Well this makes us proud to live in this city and why I choose to post this today is to thank Helen for the huge impact her work also has on the lowering of poverty in our city. By lowering crime this at least ensures that those most vulnerable have a better chance of building a better life.

My biggest life changes, latest minds, and my family life.

Yes I am still here